A sleepless overnight flight meant we were extremely happy to meet the  driver waiting to bring us to the Cordis Hotel and start this trip in style.  Straight up to the club lounge to enjoy some early evening bubbles (not contemplating that it was only 9am GMT) and get an overview on the city, maps and Octopus cards (similar to London’s Oyster).

A late night drink and supper was in order as the jetlag kicked in and so into the Backyard Bar for a drink in the hotel and we hit the streets intent on tasting some local fare.  Into a  Boat Dweller “hot pot” restaurant we went, where you choose your dish and it is cooked in a steamer located within the middle of your table.  English menu translations were unusual  (“coconut porridge pig” being one) so our waiter sent out an english speaking kitchen hand to take our order; when we made suggestions of dishes he had a look of distaste on his face.  We asked him what he would eat and he couldn’t (or wouldn’t) suggest anything.  We should have done a runner at that point but the beer had arrived and we weren’t willing to give up so easily or perhaps we were being too mannerly.

We ordered scallops and chicken and the plates with the raw meat were delivered to the table to be cooked in the steamer in front.  The only issue being that the meat and fish were at room temperature, no way they had just come out of a fridge.  We debated how we would extract ourselves from the restaurant but polite upbringings prevailed and we sat, we cooked, we tasted and ordered more beer to overcome the food and hopefully kill off any bacteria we may have ingested!

Scallops being cooked in the “hot pot”

Live lobster off for a cooking

Next morning I realised, that despite all the packing lists, the packing cubes for different clothes types, the fold away bags for cables, electronics… I had forgotten my bras.  Despite having had a pile sit on my sofa, through all the packing up, they got “put away”.  Where in HK and my asian destinations was I going to find similar apparel  that would actually fit me?  Low and behold, M&S is in Hong Kong – a girl’s good ole dependable and reliable back up, and one you only realise you miss when you are away from the UK!

Off we went walking and we managed to cover about 7km on Day 2.  All the way down Nathan Road towards the water.  Quick stop into M&S for some bras shopping (very limited in non-small sizes) and further on down Nathan Road to see what else the shops offered; and there were some surprising beauty propositions out there… I quite liked the snail slime for its moisturising effects. 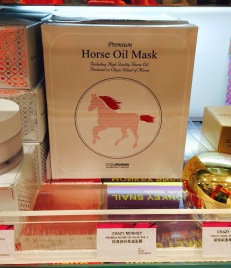 We headed to the Peninsula Hotel to see if we could book in for afternoon tea, an institution “thing to do” when you are in HK.  Alas, only those who are resident in the hotel can book and then there were the queues; we don’t do queues, especially not for a pot of tea and that was the end of that idea.

Next stop was The Peak, the highest mountain on HK Island, standing at 552m giving spectacular views of the city and the harbour.  The perfect tourist would get the Peak Tram up, alas, we heard that it was just as easy and cheap to jump in a taxi and get us up there quicker than the queue waiting for the tram.  It wasn’t until we got to the final bend before the top that I realised how splendid the views from the top actually were along with all the tourists and their selfie sticks.  But low and behold, my lovely sister had got me one for Christmas so we were able to join the masses in selfie taking and perhaps it would come in useful… 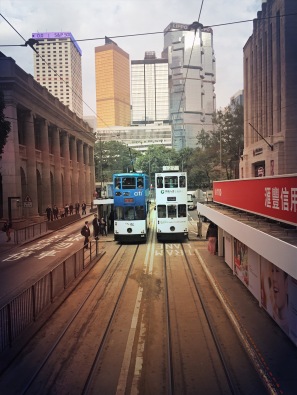 HK skyline from The Peak

Selfie at The Peak

Travelators to get you around the Mid-Ways area. Its the longest covered walkway system in the world.

We may not have got our moment of decadence of doing tea in the Langham, but we were invited to Ming Court the two star Michelin restaurant in the Cordis hotel we were staying for lunch on New Year’s Eve afternoon. Food which looked very simple had been created over many hours and the finest ingredients sourced. Double cooked soup, dumplings, BBQ pork, roast chicken, pork buns  and more as well as tea (alcohol not the norm for lunch). The service was impeccable (added bonus when the hotel GM is at your table) and the food delicious. It was topped off with desert of a fruit in jelly in frozen ice (see picture below) looking like something coming out of the mist.

New Year’s Eve was spent making our way down to the water’s edge to see the fireworks. The streets and metro system were chocka but on we went and managed to get ourselves a table on the water front  at 930pm with a minimum spend attached. 30 minutes later still  no sign of a drink. Eventually we got the attention of the English manager and he left his glass of red wine to complain about lack of service which he promptly passed to his second in command. Said manager then came over with a napkin having written that he was sick and had lost his voice with an apology for bad service. He left us to join his other guests and start on the whiskey with them.  In China it is considered rude to refuse a gift or offer of a drink. He left the bar before midnight looking a little worse the wear, not from illness but drink!

Rubbish service continued for the rest of the night and the pavements were filling up with those seeking an ideal spot to watch the fireworks. Although near the water, what we hadn’t bargained for were the trees blocking the view of where the display would be. Ne’er mind, we were in amongst all the tipsy Chinese from the bars around us and those walking past hoping for a glimpse of something special. I gave up on seeing something special when I was still standing at the bar at 12 midnight waiting for my change from a drinks order I had placed 15 mins earlier! 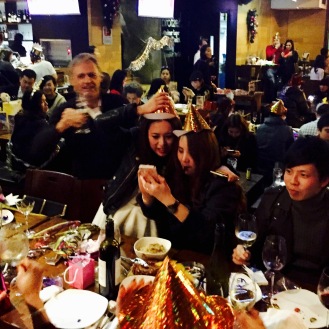 We didn’t manage to cover the minimum spend in the bar but as all the wait staff were hammered from sharing drinks with their customers we left them to it thinking an Irish bar was in order as surely that would have some life in it. We found Delaney’s (God bless the Internet and mobile phones ) and down we went. Not one iota of life or craic was to be had in the place. Small clusters of people around the pub were mostly engrossed in their phones / laptops as they communicated with others rather than those around them. One drink down and we went in search of a metro home and a Maccy D’s. We found the first but not the latter – all shut at 3am :-(and so we ended 2015 with nibbles from the mini bar, watching the Dubai hotel fire on the news and finishing off the packing for country 2, #RTW2016.