The flight from Sydney to Santiago was 12.5 hours and it just seemed to take forever.  A four hour layover in Santiago where we managed to find seats to lie down and get an hour’s kip and then a further two hours flying to Buenos Aires.  We tried to buy our pesos from the airport bank and of course the system went down.  No pesos for us.  We prepaid for a cab on a credit card and off we went to find our latest Air BnB in an area called San Telmo not too far from the city centre.  Well, it wasn’t actually San Telmo, more the not-so-nice Constitution area but hey, we were only there for 36 hours, we could cope.

We walked for miles across the city, taking in the Cemetery, the area of Recoletta, the city centre. 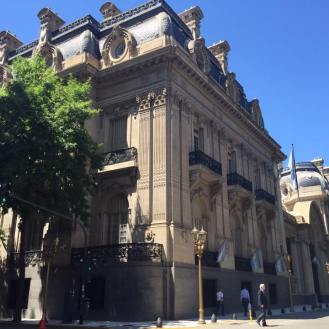 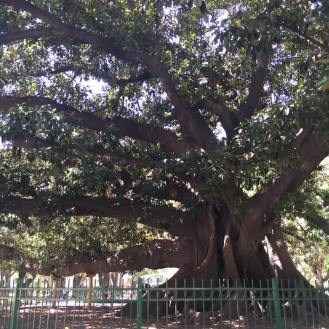 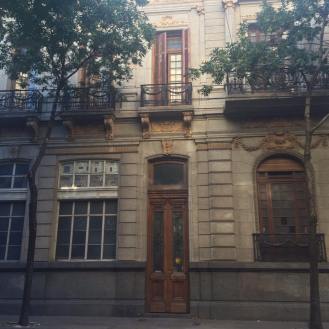 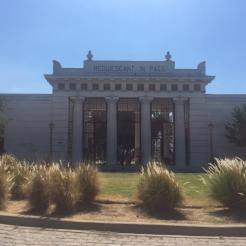 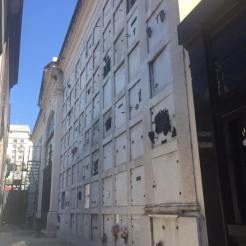 36 hours after arriving in BA, we head to the Tierra del Fuego which is home to the Argentine resort town of Ushuaia. Sometimes called “the End of the World,” Ushuaia is a gateway to the region and Antarctica to the south.

Where is Ushuaia in South America 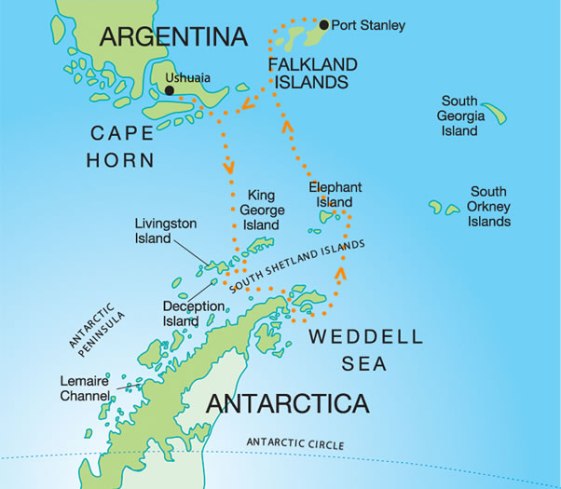 Ushuaia in relation to Antarctica

While distant and isolated, Tierra del Fuego is by no means cut off from the mainland, though the Argentine half is far more developed than its Chilean counterpart. Ports buzz with commerce and oil refineries prosper while adventure seekers descend in droves to fly-fish, hike and start Antarctic cruises. Shared with Chile, this archipelago features one large island, Isla Grande, Chile’s Isla Navarino and many smaller uninhabited ones.

We knew we wanted to see penguins.  We wandered around the various huts down by the pier to see what tours were offered and decided that Pira Tours was the one to go with as it actually landed us on Isla Mortilla to be in amongst the penguins.  It was an 8am kick off for the drive out to Haberton, jump on the boat down the Beagle Channel out to the island.  There are then rules – Follow the guide at all times.  Don’t go away from from the authorised trail.  No going within 3 feet of the penguins – except then they walk in front of you.  What do you do then??  Anyhow, we were in amongst two types of penguins, the Magellianics  and the Gentoos and boy were there loads of them things.  Making noise and running around the place.  Take a look…

Selfies with the penguins 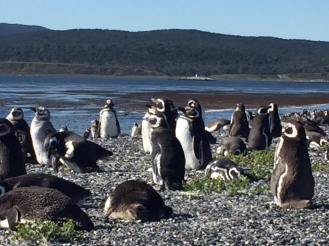 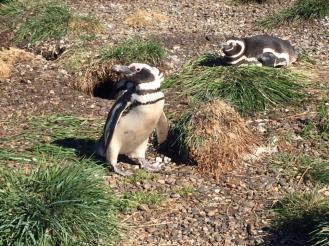 Canoeing and hiking in the national park

We joined Canal Fun Tour Group for our our day out in the National Park.  We start at Lake Roca and do a group canoe session down to Lapataoia Bay followed by a trek in the Tierra del Fuego National Park.

Entrance to the national park of Terra del Fuego 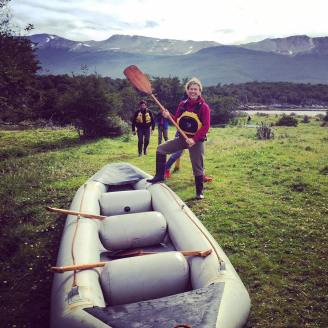 After canoeing down through the park

I had never really hiked too much before, but this was to be the first of many.  The Martial Glacier is a few kilometres northeast of the City of Ushuaia and is 1,05m above sea level.  We got a taxi part of the way up.  The chairlift wasn’t open, which only goes part of the way,  so we had to hike all the way up which wasn’t as bad as I thought it would be.  We hit icy areas even though it is the middle of summer.  At the top we get views of the Beagle Channel and Ushuaia.

Where the taxi takes us to 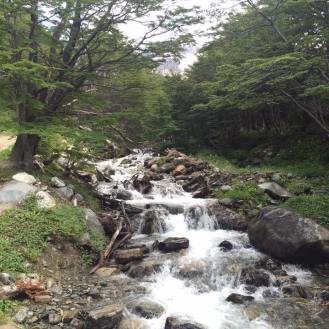 One of the many waterfalls as we go up 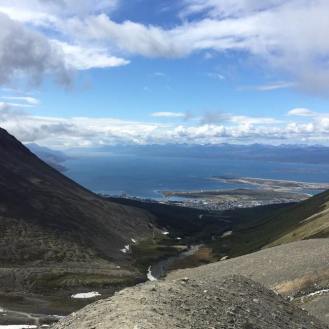 Looking back down into Ushuaia and the Beagle Channel 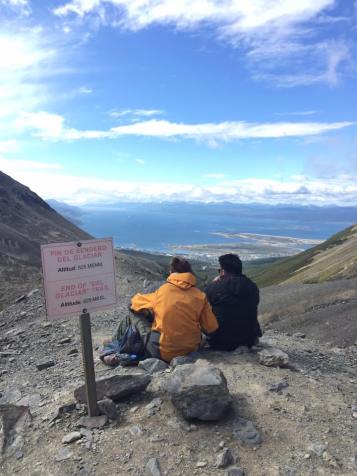 We got a taxi out to Lake Esmerelda, to do a 10km hike.  We weren’t sure what we were going to see but we weren’t disappointed.  Waling through the forest we came to a clearing to see views of Tierra Mayor and Carvajal Valley alongside pur first small  glacial lake before going through further forest, across the peatlands, alongside the flowing ice water stream up to the magnificent Lago Esmerelda. This lake is surrounded by the Albino´s Glacier, the torres and the Toribio mountains.  The pictures explain the scene better than i can.

Of course at this point, the temperature fell, the wind picked up and the rain swept through.  We headed for the trees and a clearing where we would hang out, have a museli bar (lunch) waiting for the rains to stop.  Once they had started to clear, we headed further around the lake to come across a mystical area of the lake that was dotted with beaver dams and dead trees within. 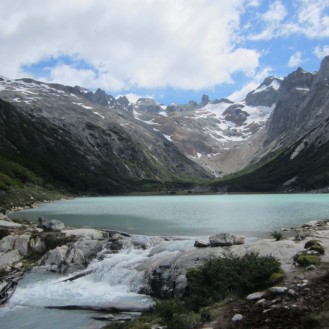 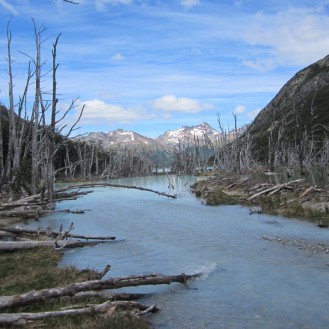 The desolate landscape at rear of the lake

We spent a week in Ushuaia watching boats come and go from our apartment, a variety of hikes in the national park and finally we meet our Tucan group who we were going to be spending the next two weeks with. 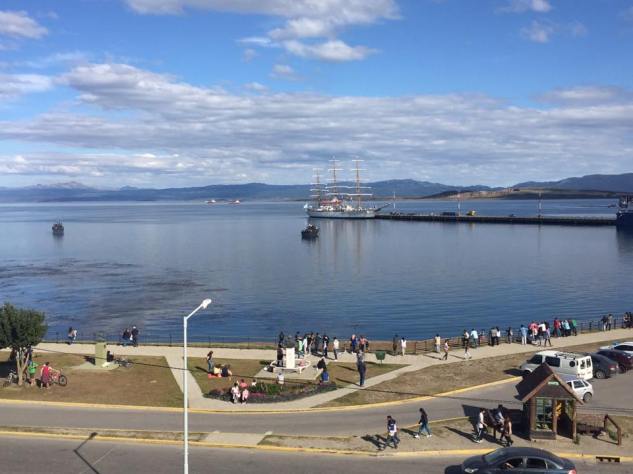 Looking down into Ushuaia by day

Looking up into Ushuaia 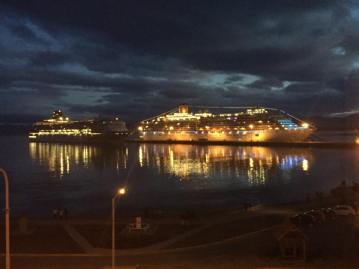 One of the big cruisers docked 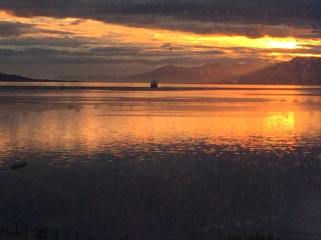 Ship goes off into the morning sunrise