We were staying at The Hummingbird Hostel in Tzununa on Lake Atitlan, run by the lovely Katie.  Erring on commune style with volunteers there to help out and guests. Laid back and friendly we immediately felt at home and hung out for dinner and drinks.

Entrance to the Hummingbird, also known as The Yak locally 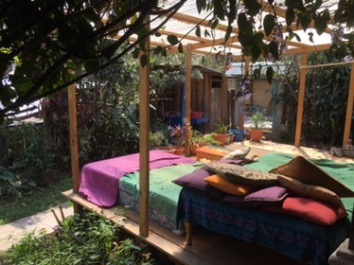 Tuk tuk time from the port

The next day I was up bright and early to the we decided to go for the hike along the lake path to Jabalito which had stunning views across the lake, a bit of scrambling across rocks and bumping into non-tactful french tourists.  It was about a 90 minute walk and Katie had suggested that we go to Hans Schaeffers’ Posada for a drink afterwards, a german who had been in the region for fifteen plus years and had set up a market / restaurant / posada for eaters, buyers and overnighters in the quiet hillside looking down on Lake Atitlan.

On the walk / hike to Jabuelito 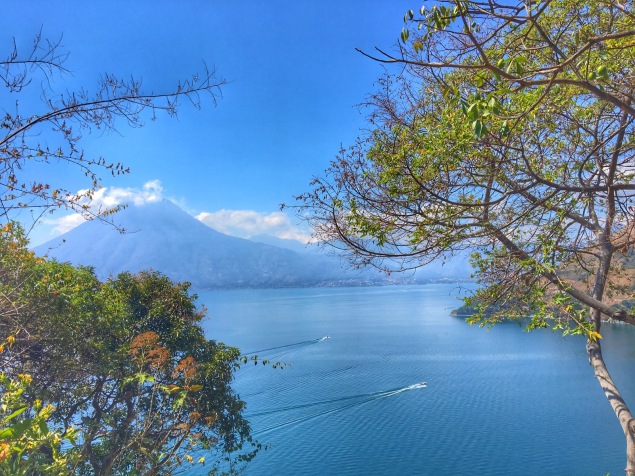 Amazing views down. Go at sunrise and no doubt it would be even more stunning.

The next day I was up bright and early as someone nearby started to play loud off strangling music which in turn set off the cockerels and dogs.  To this menagerie of sounds, I got my arse outta the bed and headed down to the lake to watch the sunrise.  I think I chose a good day to go there….

The sun just rising above the horizon on Lake Atitlan

The fisherman’s day has started

Second boat of the morning arrives in to pick up passengers

That morning decided that we would head up to the waterfall, followed by a visit to San Marcos and perhaps treat ourselves to a massage.  Sigal, another lady from the Casa joined us too.  It took a little longer than we anticipated as we took a wrong turn.  After asking directions from locals carrying their wood piles down, we finally made it up to the waterfall with a cave behind it.  It was good to get away from the midday heat and take in the flowing water.

Waterfall with the cave behind it

Looking out from the waterfall back toward where we walked up

We were taking various pictures and Isabelle asked me to take her picture in the sun, to be almost be darkened out.  Whilst we were trying to get the image right a young man came up to Isabelle.  We didn’t take too much notice, but he had his machete in his hand and was talking about putting rubbish in the bin (we think) and off he went.  We didn’t think anymore of it until we were walking back down the path.  Isabelle in front, Sigal in the middle and me behind.

Walking the path (with bag)

The three of us at the waterfall

We heard a voice coming behind us.  Sigal stopped and sat down on a rock to take a breath. The young man who had been talking about rubbish was behind me; asking me for a propina aka a tip.  In my mind I didn’t understand what a tip was for; he was just chancing his arm.  He babbled away in spanish which I did not understand and after a brief conversation with Sigal about it, we said no and off we walked.  Sigal had just turned the corner of the rocks, and suddenly the bag was yanked from me.  It had been strapped over me, being a cheap thing from Colombia, it broke and off he ran.  I screamed in shock , just didn’t see it coming.  Sigal came back up thinking he had attacked me (remember he had a machete hanging on his leg).  I should have given him “a tip” as what he got away with was going to cause me a lot more hassle.

What was in my bag?  Well when you initially think about it you come up with the big items.  Then when you go away and  really start thinking about it you start to remember. So my purse contained money and 3 credit cards in it as I had just been to the bank the day before to withdraw cash to pay for accommodation and bus the next day to Mexico. 3 cards just in case one didn’t work which was often the case.  Drivers licence, just cos it was in the purse as ID.   My Irish Passport – don’t ask me why I hadn’t taken it out and left it behind me; pure ha.  Phone charger.  My packet of SIM cards as I had been trying to contact Three in the UK as my SIM was not working.  Sun cream and the usual female bits you chuck into your handbag!

The only trouble was we were due to leave the country the next morning, jump on an early morning bus and go across the border to Mexico… how was that going to work out?  I would need a police report to back up the story that the passport had been stolen, hence no entry stamp in my UK passport.  I rang both embassies to see what their thoughts were but they were of little use.  Cards then had to be cancelled.  Driving licence cancelled.  Was it worth going down the travel insurance route?  I still need to work that one out. 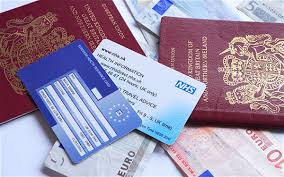 Whilst all this was going on Isabelle was looking through her  photos and realised that I had taken a photo of the thief, the little blighter.  Katie sent the photo out to a local facebook group and someone came back with a name! It was time to go visit the police to get the report writing underway but the office was empty.  Out on patrol was the excuse given.  With that Katie and Jan headed up to the waterfall to see if the thief had left any remnants of the bag and hopefully my passport!  Alas, nothing!

He’s there with machete laughing at Isabelle pointing to the bin; his cover story for checking us out

It looks like she is telling him off, but is just trying to understand what he is talking about

The police eventually showed up at Hummingbird at about 330pm. They told us we should have taken a guide on both the walks; they were available down near the port. Robberies had taken place on both of the routes that we had completed and the locals should have known that guides were advisable . The police took the details and told us that we needed to come back to the station between 5-6. Then it was time to hit the rum; the fabulous bottle of 18 year old Flor de Cana that I had been carrying around with me.

Of course it wasn’t ready and we were told to come back at 2000. Went back and Maria the police chief had just come on duty and was reviewing the case. Turns out they had a video of this guy, with a cousin requesting “a tip” from other tourists but one of the guys had recorded the who had handed over the money.

Chief wanted to get these guys and I needed how paperwork so we agreed to go to Santiago on the lake and make statements with public authority. We left for there at gone 2100, got the local notary out of hs bed for 2300 and made it to our beds at near 0230 to be up at 0530 to catch the ferry and bus at 0700. Except there was no bus. As the bus was not expecting us (the other hostel had said it had been confirmed) but we did not have a ticket indicating that we had paid (which is key in this travel game) the bus had left at the allocated time of 0630.

In the back of the police truck 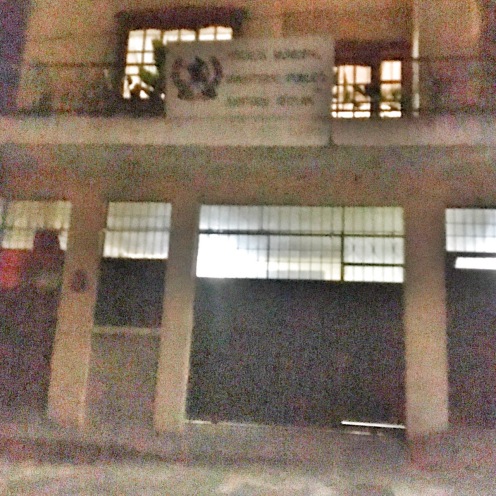 Waiting outside police HQ in Santiago

The coffee shop owner came to our aid, must have felt sorry for us, and he made some phone calls, put us in the front of a pick up truck which would take us to a place where we might be able to get a shuttle, but alas, no!  We ended up on a chicken bus to Quetzeltango in the hope of continuing the journey but again, no such luck. All shuttles gone for the day.  Next one tomorrow, at 0800, pick up from hostel (that we were yet to have found) to continue to San Cristobal and hope that can get out of the country with the paperwork I have or else bribery would come into play! 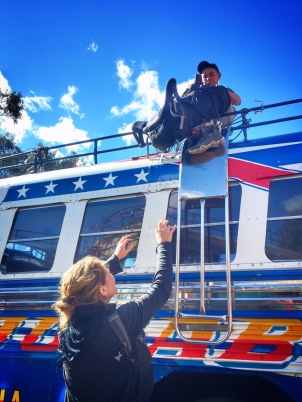 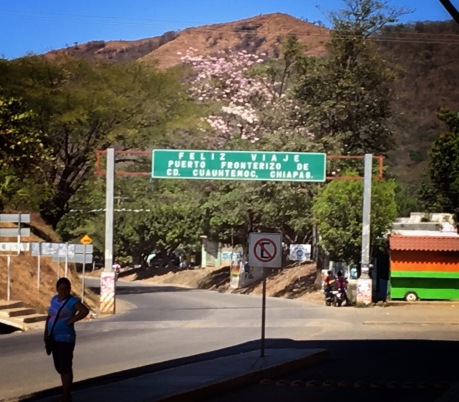 Relief – we made it across the border

The police continued their search.  They even sent me a picture of them of there at the waterfall,  but alas, it was not to be found and who knows, even though they knew who the thief was, all the tourists who they were stealing from were not around to stand up in court and put the sumbags away.

We had a few questions at the border from immigration but once they had a look at the police report, thought about whether to investigate if dual citizenship was possible, they  decided to save themselves a whole lot of hassle and just let me out of Guatelmala!

So there you go; adventures in Guatemala…