We were back on our Bolivia Hop bus for a long day ahead. Collected at 0830 we headed for the Bolivian border on our comfy bus. For the first time ever I got to see the movie The Hangover, after all those times in  Vegas I had never seen it. 2.5 hour drive around lake Titicaca we got to the border crossing. Our bus guide took us through customs and then you have to walk 10 minutes through no man’s land into Bolivia  border crossing  where we were met by the  Bolivian bus for the  next segment of the trip to  Copacabana on the  Bolivian side of  Lake Titicaca for a trip out to  Isla del Sol. 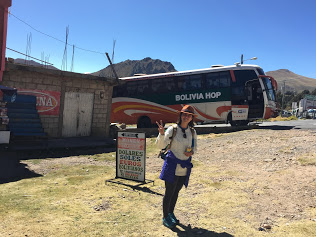 Walking over no man’s land from Peru into Bolivia

Waiting in the line to get our passports stamped

We had a lovely trout lunch overlooking the water and headed for our boat. Now if you don’t know me, I have a tendency to get sea sick. I didn’t even think that the lake was going to be in any rough. Wrong! Wrong! Wrong! OMG. Was not a good 75 mins. Waves coming up over the front of the boat. I felt sorry for those who had gone and sat up on top and outside. Add altitude into the equation and boom, you feel like shite real quick!

Getting onto our little boat

All that for one hour on the island on which we hiked up another 300m to see the stunning mountain line that we were going to be driving around later, bringing us to 13,800ft above sea level.  Spectacular for sure, not sure if was worth the nausea.

Looking out from Isla del Sol

Looking out onto the other islands around Lake Titicaca

The hostel on Isla del Sol

Looking down from the hill side

The boat journey back… He took it slow. I think he was running out of petrol and was trying to conserve it. He had to pull out fuel canister midway through. But at least we were all feeling a  whole lot better than we were going out.

Onto the Bolivia Hop bus, we had a four hour bus journey. We had chosen our seats when we realised we were behind the “throw up” guy from the bus the previous morning. I couldn’t face listening to his wretching (heartless I know) especially as we were going up to higher altitudes and he was permanently affected by it. So we ended up as the back of the bus. Bad choice. Crazy bus driver as we went around the mountains, and back there it felt like we were being chucked around the place and the back of the bus veering over the edge each time we went around a steep bend.

Another boat ride was needed to  continue on our way.  We all had to get off the bus, get onto small boats across the lake and wait for our bus to be transported across. Previously passengers used to stay on the bus until a bus went down with people on it!  Back on the bus for a further three hours around more mountains except this time I sat up the front with a plastic bag to hand. It seems there are lots of roadworks happening and we were on a mass of diversions on back bumpy roads.

As Bolivia is not known for its food delicacies, we signed ourselves up for a food tour with Red Hat Tours just so we knew what we were even looking at as we walked past the food stalls and if we should even attempt to eat it.  We eventually met our guide Jorge outside the Cathedral – what we had not reckoned on that it was the day that all the museums were open free to the public and there were lines of people everywhere including all around the Cathedral and of course traffic in the city was a little bit crazier than usual.  Anyway on eventually finding him he brought us to our first stop, the local market building where we shared an Api Morado – a hot purple corn drink which can often be fermented too, but fortunately we didn’t get to try it out.

Cattle heart on skewers with spuds

Next on the menu was cattle heart cooked alongside potatoes on an open BBQ  in the open market area.  I don’t think i would have ever have tried this if it was not the tour and it was #delish .  Afterwards we headed for a local restaurant where it was time to sit down and try some local pork dishes and a beer.  Next stop was Sol y Luna where more meat and potatoes were on the menu along with another local cocktail.  To say we were stuffed afterwards is an understatement.  Way more meat that normal, heavy corn drink, beer and cocktail all proved too much for us and we couldn’t stay out drinking with Jorge.

However, on arriving back to the hotel there was a concert happening pretty much outside our window.  There was  museum just around the corner which was open until midnight, hence the band and a throng of people about.  There was no point in staying inside, so we went and joined the line to go into the Architectural museum and take in the madness of the band as well!

For Sunday in La Paz, we had organized to go on a cablecar tour with Hanaqpacha Travel which started at Jaen Street, one of the oldest in La Paz.  Our tour was  involve the Sunday market at the top of the mountain in El Alto which is the world’s highest metropolis at 4150m.  The cable cars are some of the highest in the world and have only been opened since 2014 with more lines still under construction.  We met our lovely guide for the day, Anna; jumped on a local bus and took us to the bottom of the Red Line that would take us all the way up to El Alto.  Up here we got to see the workings of the largest market in the country 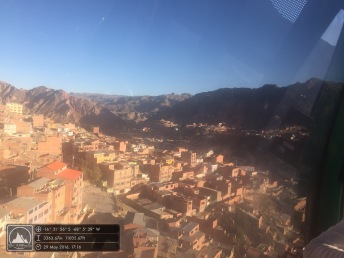 Looking down onto La Paz from the cable car

A people shot in the market 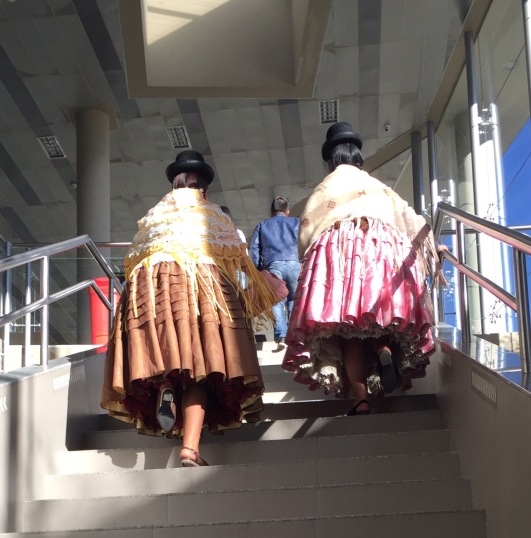 Traditional costumes are the norm 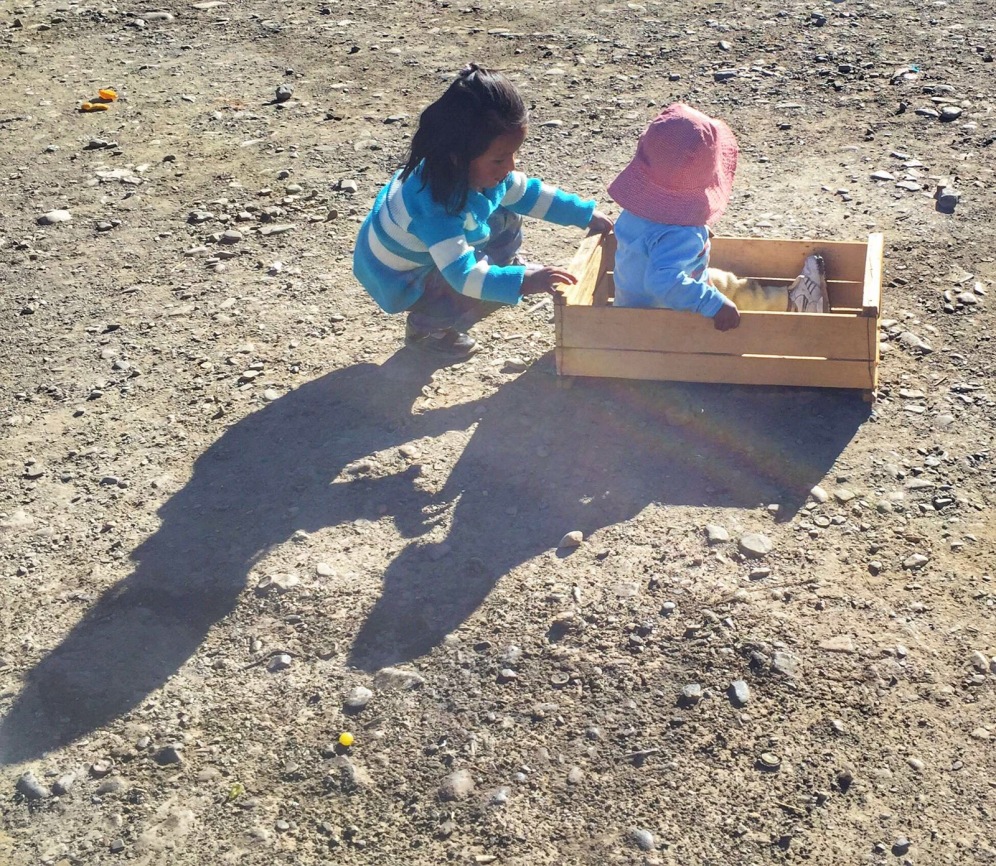 Who needs toys when you have a box!

And then there is the Witches Market.  Anna explained that the witches did readings; you just needed to go and knock on a door, confirm the price and off you go.  My friend decided that she wanted a reading done and so into the hut you go, and the witch throws up coca leaves.  They land on her table and she makes predictions from the way they have landed.   Up there with reading tea leaves I’d say; however, here her shelves are covered in real skulls looking down on you…  We were lucky that our guide Anna was happy to translate for us. She had actually used this witch before who had told her that her boyfriend was cheating on her and to pray to the Pacha Mama for help in removing him from her life. 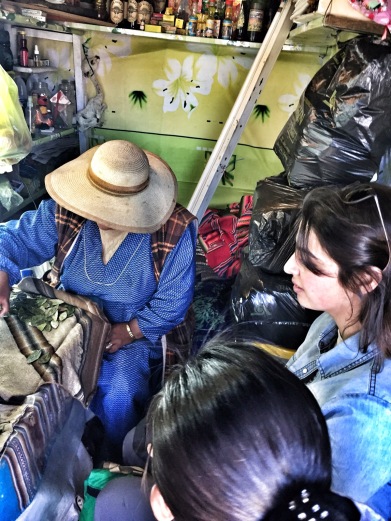 The witch giving her reading 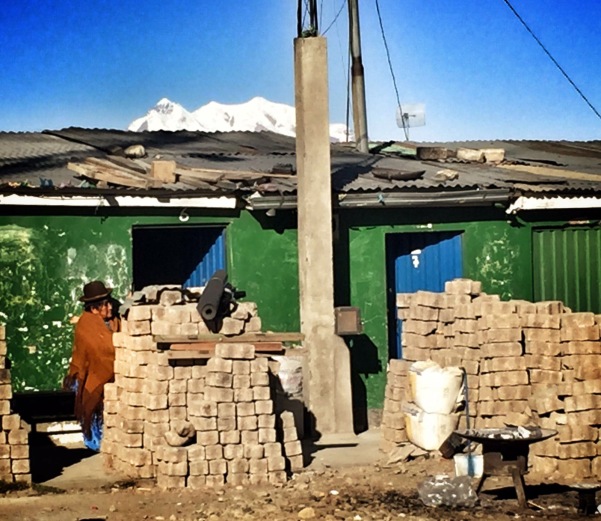 And we continued the day criss-crossing the city on the other cable cars that brought us to different areas of the city.  After this we went by minibus across a couple neighborhoods of El Alto to arrive at the yellow line, this line brought us to the beginning of the south zone where we transferred onto the green line to go further into the south zone of La Paz, chichis where we saw the most modern face of the city and all the houses on the most unimaginable hills.  All in all, we got to see a lot of sides to this diverse city that we never would have seen otherwise.

Next day was the cycle ride down Bolivia’s Death Road…