I had decided a long time back that if I was to make it to Bolivia then Death Road would be on my list. It’s named so because following the war with Paraguay they used all of the POW to build the road to open up La Paz with the valley where all the coca leaves were being produced. (Of course cocaine production didn’t have anything to do with this at all).

They started to build the road back in 1932 and it was finally opened in the 1960’s. By this time all the POWs had died. Bodies left, one can only assume, over the side. Hence the name Death Road. However, it is often thought it is named so because of the amount of vehicle deaths that happen on the road; 300+ in a year. This number was often due to large scale accidents happening; ie two buses crashing carrying 50 plus passengers just pushes the figure up straight away. That was until they built a new road, the old one, which we cycle down is mainly used by tourists looking for the t-shirt. On average 300 people cycle down each day. 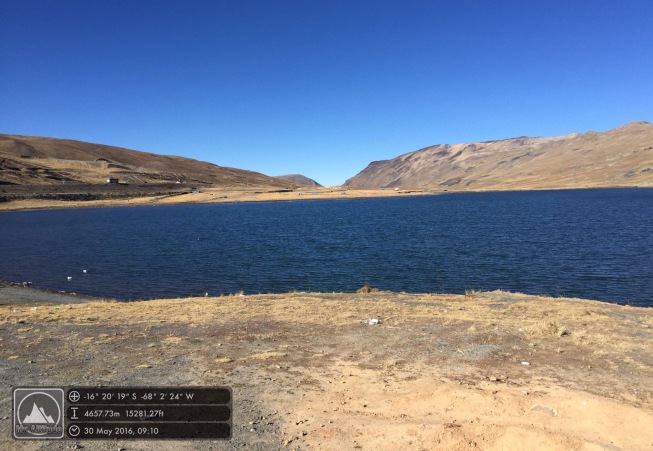 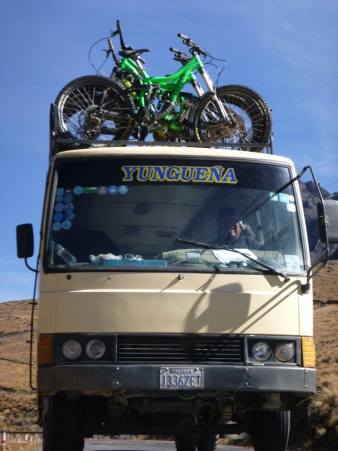 Our group, all layered up at the start of the ride

Anyway, back to my day. It started in a bar with Gravity Bolivia! A 10 strong group of Americans, Aussies and me! Our bikes were worth $3500 each with hydraulic suspension brakes and we were told to let the bike lead the way. Our guide was a young yank who had been a BMX pro in his younger years; had been working on the route 13 months and was leaving to head back stateside the following week. We were starting at 15,000 ft and boy was it cold up there. We were given wind proof jackets and trousers for protection. We would de-layer as we went down. Helmets and gloves were to be worn at all times.

Looking out onto Death Road

Careful where you stand

Its a sheer drop down

Safety was the name of the game. Nate was not looking to practise first aid on our group today. However by the second segment of the ride he was practising, though fortunately on a member of another group who was going too fast, had to hit the front brake and over he went. Concussed he was. Which means he was back on his bus and off to hospital in La Paz to be checked out. Waste of at least $124 so early on. Didn’t even make it as far as Death Road. The first 22 km of the ride is on paved road so you can get used to the bikes and brakes. After that we were on Death Road for 33km with 400m drops on our left. 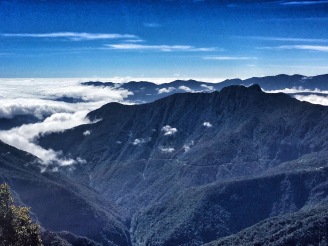 Nate liked to give us anecdotes of accidents that had happened on the road, going over the edge, heading over the handlebars, walking down the mountain with the bike to the hillside and being knocked over the edge by upcoming bus who did not see the cyclist. It seemed to go on… Fortunately we only had one wee accident, when one young man ended up against the cliff taking a corner too fast and required his elbow to be cleaned up and bandaged.

We made plenty of the stops on the 55km descent. For photos, safety briefings, being told how to take certain bends, dealing with the rough roads, the rocks on the road, how you don’t go over the 400m drop as the safety rope is only 150m long… 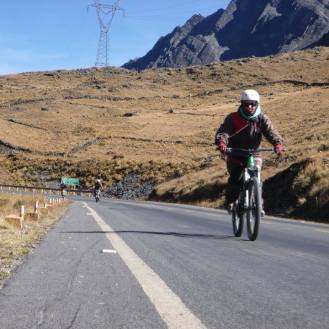 Starting out on the paved road

Crosses all along the roadside for those who had died

You forget that you are going to be using muscles that you don’t usually use. Forget the legs, they’ll be okay, they  don’t get used much, it is the fore arms and wrists controlling the handlebars that take the brunt for the day. By the second to last segment my forearms were in bits. Every bump and rock the bike went over  I could feel in my arms but had to keep going. No way of getting this far and not finishing. I was the last one to finish each segment but I was just happy to still be standing at the end of each segment with no injury. I nearly fell off the second segment and got caught on camera but overall I was upright for the day.

At the end of the last segment, we were greeted with a beer and a parrott. Boy was that welcome, the beer that is. The parrot had a tendency to bite. We went on to an animal sanctuary for a very late lunch at 4pm and it was then time to hit the road for the 3 hour journey back up to La.Paz and 12,000 ft. It had been so nice to be down in the warmth and humidity. It’s going to be a little while until I hit heat again…

Parrot comes to meet us with a beer

Packed up and ready for the three hour drive back up to 11,500ft

Woo hoo! We got down alive and no injuries

Looking out onto Death Road, that I was to conquer