I came across Condor Trekkers whilst I was looking for an lunch place to go as the run a vegetarian cafe as well which was packed with backpackers and locals alike. On further investigation I found that they also organised tours within the local area too. Both businesses were being run as “not for profit” with the aim to employ locally and put money back into the local environment. When making enquiries I was told that the next “Seven waterfalls” tour was actually at a reduced cost as it was going to be one of their twice yearly “clean up the waterfalls”days. What else was I going to be doing? So I signed up.

Arriving into the cafe the next morning it looked like there would be about 15 of us heading out, a mixture of volunteers and Condor employees. On arrival at the waterfall you could see the mess of the area; locals would go there at the weekend to hang out by the water and just leave their rubbish and plastic bottles strewn all over the place. We had to go rock climbing into various ravines to catch the different waterfalls, although it was the dry season so they weren’t too impressive. We got as far as the fifth one and we started to work our way back picking up garbage that just seemed to be everywhere. People really didn’t care.

Heading out to rubbish collecting 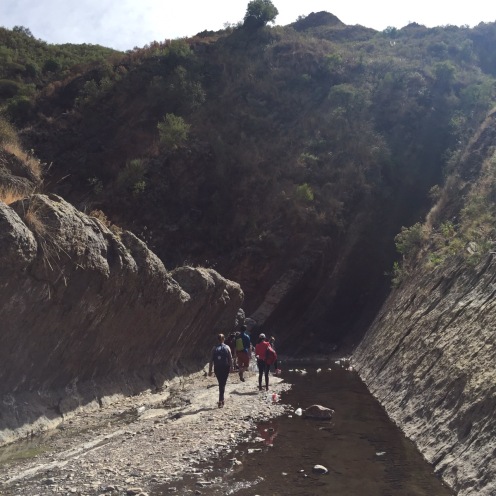 Walking through the canyon

We filled bag upon bag upon bag whilst the Condor men installed with concrete their four bins across the waterfall area. I’m not too sure how they think they will empty them on a regular basis as well as them not being user friendly, but that is for them to work out, the thought I’d there. Once completed it was food time by the water and out came the picnic, vegetarian of course followed by a swim in the water (which was bloody freezing) and if your were up for some rock climbing it was possible to investigate waterfalls six and seven.
With our work done, and we had to bring all rubbish back to the bus along with one injured volunteer who had hurt his ankle during his waterfall search. He was brought back up to the bus on the shoulders of one of the guides. So my bit for the environment was done, it was back to the Condor Cafe for a beer and whet I found myself signing up for about two night, three day your starting at 0630 the next morning! 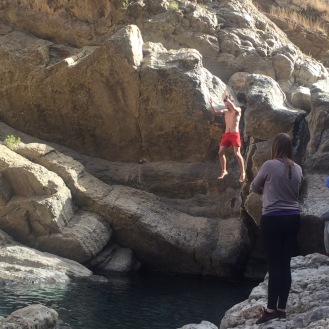 After the collection time for a break 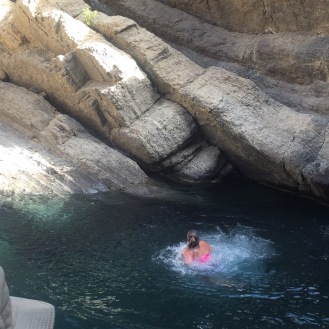 In the waterfalls that we were wandering around 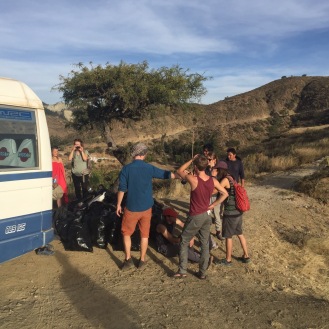 Some of the rubbish and the group

The trek was pretty much going to cost the same price as staying in my own room in the hostel along with food. Three days and two nights in basic accommodation, with your guide, 3 meals a day and two on the last would cost the grand total of £64. It was a no brainer which meant that I got to leave Sucre over the weekend, which although a really nice city, the traffic and the pollution that came billowing from the old buses and cars could be quite overwhelming.

As I walked in late for breakfast there sat Jono and Gemma who I had met in the hostel in Salta four weeks earlier. We had had an asado one night and Jono managed to throw a bottle of red wine over me. Small world eh. But there were six of us on our tour, Jono and Gemma, a Mancunian couple and French young lady and I; along with our guide xxx. Backpacks were required for this route as we were being dropped at the top of a mountain and would be picked up at our final destination on Monday morning. Food for the next couple of days was divided up between us and off we went. It had felt ages since I had done the trekking in Patagonia and muscle forget quickly what to do. Carrying a backpack larger and heavier than my day peck was not in my repertoire. It was going to be a pretty tough hike. 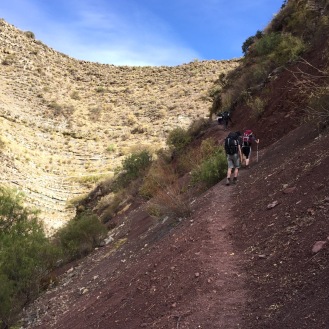 Scaling the mountain side

Sunrise after our first night 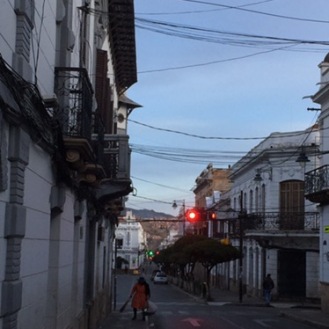 The early morning streets of Sucre

Our trek starred in Chataquila at 3650m and we would continue down down hill on the Camino de Inca trail. Down the steps we went, more steps and more steps. On one if our breaks three people passed by us, one being a French guy who had been staying in the booster I had been in the past few nights. The steps had all been put in place a thousand years ago. We headed down until 2,700m where we had a vegetarian picnic lunch at a mirador with views above the unique, naturally formed crater of Managua.

As we sat there, she spotted the three hikers who had passed us by. They were sitting up on the hill waiting for us to go so they could follow us. Our guide was not to happy with this idea and we waited for as long as possible before we set off again, this time, we were starting the uphill section. After lunch, we continued down the trail past the aqueduct which supplies Sucre’s water and then follow the Ravelo River past magnificent rock formations to Socobamba and the suspension bridge.  After crossing the river, we headed up past waterfalls and spectacular rock strata.  I was so happy that Chris had lent me a walking pole to use; there was no way I could have continued without it; this was hard work! 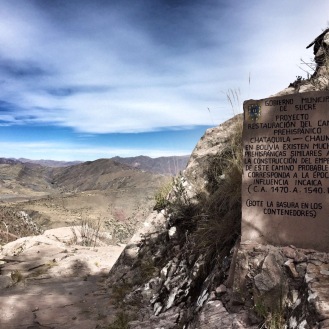 The start of our hike 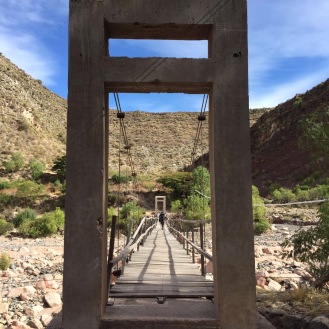 Foot bridge across the gorge 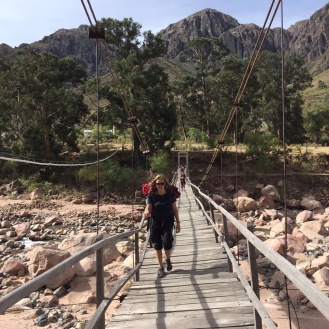 Wandering across that foot bridge

From 2,700m we were to finally end up at the 3,100m waking up more steps, a bit of rock climbing, sand walking was chucked into the mix as were headed towards Manakwa, an old volcano crater in the middle of the mountains. The scenery was spectacular. I found the hike tough with the backpack weight feeling like a bag of stones on my back by the time we got to our accommodation for the night. Of course, arriving to the cabanas, there were the other three trekkers close behind us not to sure what to do. 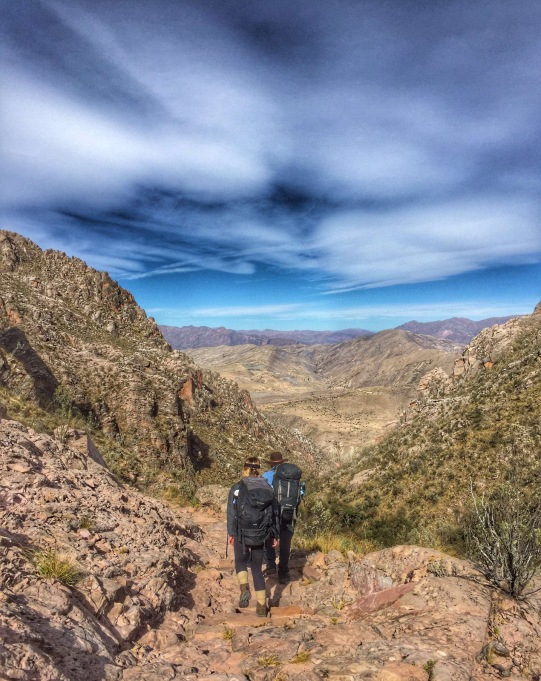 Heading down the steps of the old inca trail 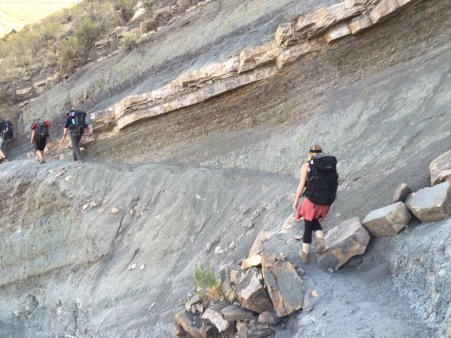 Heading across the ledge not looking down 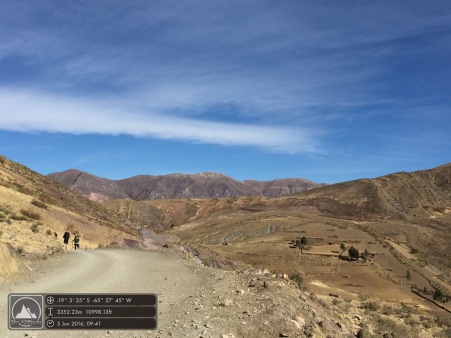 Day two we were up at dawn to have  breakfast before heading west to rise up out of the crater and enjoy magnificent views back over the entire crater. Behind the crater, we passed picturesque valleys on the way to the incredible dinosaur footprint site Niñu Mayu. There we seen the foot prints of the T-rex, which would walk alone.  It’s just amazing to think that there wss life that long ago and there are still remnants, footprints left behind in this soft volcanic rock. 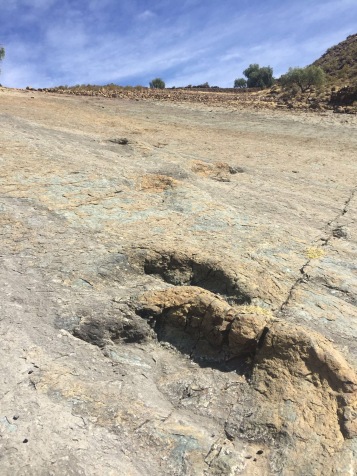 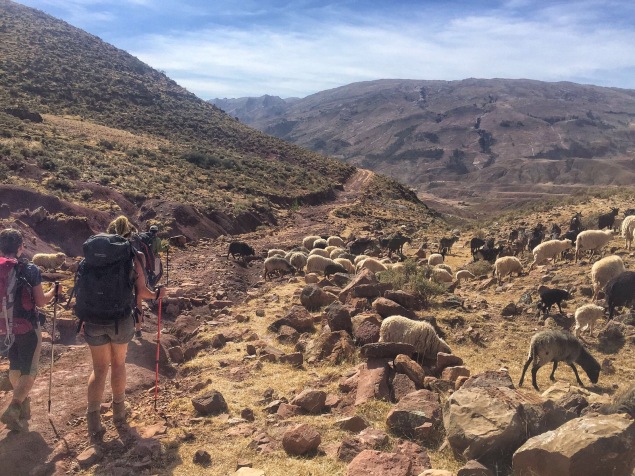 Wandering through the sheep

By the end of the day, we had reached our destination Potolo and just so happy as we had hoped that this evening, we were going to get showers; alas, no such luck.  However, it was possible to find a bottle of well-deserved red wine and a couple of beers.  Our wonderful guide cooked up a super meal of pasta on a tiny stove and we were all set for the evening and in bed at a very early hour; we had to be up and out waiting for the bus at 0700; breakfast of pancakes was served at 0630. 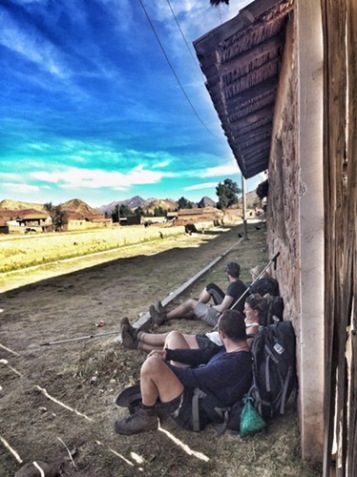 Collapsed waiting for the owner of the accommodation to show up

Our well deserved glass of vino

it was the end of our hike, we jumped on the public bus back through the gorgeous valley of the Rio Potolo and over the Cordillera de Los Frailes and back to Sucre.  My time in Sucre was coming to an end, but it was definitely a place I would remember.