We took to the streets of London on the London hire bikes aka Boris Bikes / BoJo Bikes; previously Barclays Bikes and now Santander Bikes – bloomin heck this is complicated.  I knew the direction where I wanted to get to and knew how to get there except I didn’t really.

We started our journey at one of bike hire station in St John’s Wood and continued around Regents Park (the wrong way) Simon got us to one of the gateways to the path along the Regents Canal.  Sometimes they can be quite difficult to find; this was one of those times. This particular one was located at the back of a housing estate; only that Simon knew where it was there was no way I would have found it.

Off down the canal we went. Sunday afternoons are a busy time along the canal with local people mixed in with tourists from all over the world; so cycling along a narrow path is not easy as everyone walks on different sides of the path (according to where they come from)! We got towards Camden Market and the path got very busy, to the point that I almost went into the canal but with a wibble and a wobble I managed to stay in.  At that point the decision was easily made to get off that bike and walk it. The Santander App showed us where the nearest parking station was and that there was space available to park up. 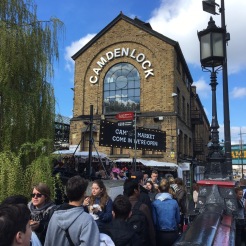 Tourists and Londoners out in Camden

Time to escape the madness for a coffee 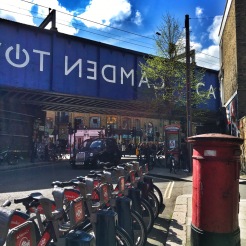 One of the bike stations in Camden

Coffee time! Forget the major chains, we found a small local place called T & G for some cups of coffee and a sarnie before we went out to find out next bike to get us to Granary Square in Kings Cross for our next stop. From the canal path there is a grassed set of steps going up to the Square but first we parked up the bikes on the other side of the canal. So many places to choose from to hang out, for drinks and for food or trains to Paris, Lille, Edinburgh or Manchester to start off with. 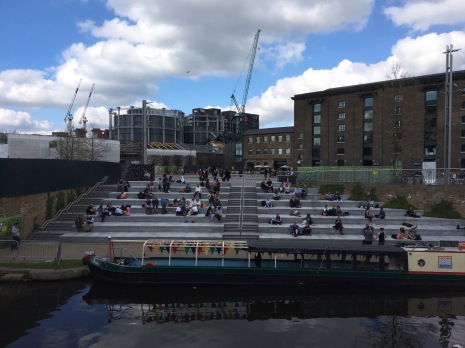 THe steps up from the canal to Granary Square 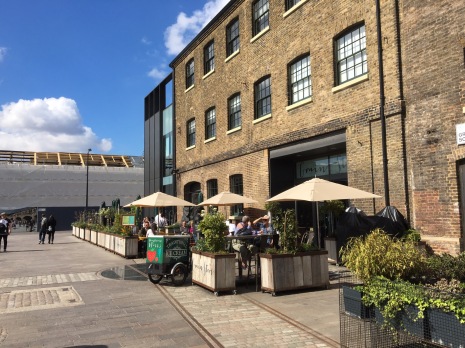 Need some new reading material, you can pick it up on this barge by Granary Square

From Kings Cross we were got some more bikes and headed for Islington with the aim of going further east; however, it transpires that there is a section which is a tunnel only, no path. It was necessary to come off the path and find our way to the next parking station via Chapel Market; again bike walking. 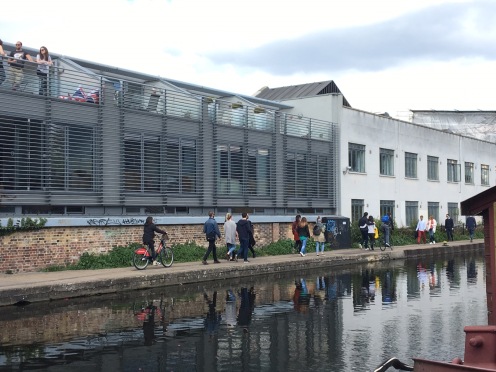 Cycling along the canal slowly so as not to fall in

Simon had in  mind a place of where our next drink would be.  A little obscure and out of the way he said and he was right.  We came up to a gate, bell on it that you needed to ring to gain access to the canal and there was a bar down there, which had seating on various floating vessels.  I know it wasn’t the warmest day but there was hardly a soul down there; I suspect the locked gate was the deterrent to increasing business; all the other bars along the canal were heaving.  If you fancy finding it, it is called The Commissary; just ring the buzzer and they will let you in. 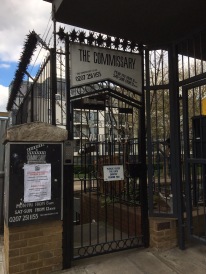 The entrance to canal to get to the Commissary 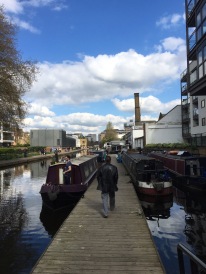 The stroll down to the bar

The Commissary to buy that beer

Inside they have recently had a revamp

All in all, we went out and achieved what we intended to – a cycle along the canal with a couple of stops along the way for some food and drinks.  What better way to spend a Sunday afternoon.