So! The thought of going back into corporate 9 to 5 (plus some) life didn’t inspire me at all. Couldn’t face sitting at an office all day long, expected to read emails long after the working day is done or before it has started (perhaps France woudl be the place to live), the office politics, the bitchin . Avoid at all costs I thought…

I’d been a tourist the last 15 months and even though I’d returned to London, I didn’t want to quite lose that feeling. This summer back in my home city I wanted to be out and about. I wanted to be on the move. To get caught up in all that is London. To be in the tourist madness; to be part of it.  I had acquired a liking for being out on my bike. Cycling around town. I was offered the opportunity to join a guided tour to see what the job entailed; to see if it was something I wanted to do. 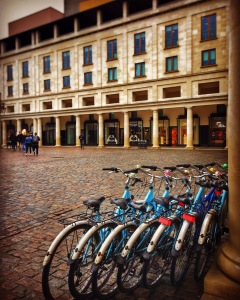 I showed up on a Monday morning and there were 4 other wannabe tour guides who had started their training. On this particular day our German tour  guide was showing us how to still continue with a cycle tour whilst there were London road closures in place; you know for a marathon, opening of Parliament, Queen’s birthday.  It was the detour routes even though I hadn’t completed the original route.

We weren’t given a map to show us where we would be going, we were expected to follow and know!  We cycled out of the compound and hit the streets. Off we headed toward the back of Waterloo, the Old Vic, Lower March, Banksy Tunnel (who knew it was there) and on through the back streets of south London to get to Lambeth Palace.  I used to work around there; office work. Tied to the desk but three years in the vicinity you kinda get to know a little about the area. The other 4 wannabe guides, well, none of them were local. Actually one of them had only been in the city 2 weeks. How does that work??

So these 4 wannabe guides. Well, the first was a Canadian. She had been living in India the last 3 years and had been in London all of 14 days. She was renting a room on a barge on the Regents Canal in East London (which I thought was pretty cool) that was on the move on a regular basis.  She figured that getting paid for cycling around London would do it for her.  How she was going to remember this detour route, who knows; I had difficulty keeping up as we came through the back streets behind Westminster Abbey.

The next wannabe guide was an Italian woman.  She looked older than me but probably wasn’t.  She wasn’t your regular bike rider, she fell off within the first ten minutes of being on it, her saddle was way too low and to boot she was carrying a big handbag, the type that had thin straps and you sling over your shoulder and swings on the handle bars slip-sliding all over the place and unbalancing her. Turns out she had high hopes for becoming a Blue Badge Guide.  For this you need to have an indepth knowledge of London as well as places off the beaten track and a very limited places are available each year. The next thing I know, she had tears running down her face.

What was wrong?  I had only asked her where she was living…  Well I wasn’t expecting that reaction to my simple question.  Well she had been working 8 days straight and she lived alone without a partner (I’m presuming that this was the issue, but didn’t ask any more on it).  Her ideal job was to go and be a curator in a museum and here she was attempting to badly ride a bike around London.  When our guide did get a puncture she looked on with horror.  I’m not too sure what she would do if one of her group got a puncture or the chain fell off (even after a maintenance class).

Then there was a young Dutch girl; the only one making notes as we went around the sights.  She had been in London a short time too.  I was trying to hold a conversation with her as we cycled a long but she wasn’t having any of it; too busy concentrating on the route we were taking and trying to keep the bike in a straight line.

The final was wannabee guide was another Italian lady.  However, this time she had been in London for four years and had been trained up as a tour guide on the London tour buses.  She had a better idea than most about what central London (on her bus route) was all about but cycling was not her forte and then there were all the back streets in the City of London that all looked the same and were easy to get lost in.

To be able to take a group out onto the streets, you needed to have been out on the basic tour at least three times, answer the 20 questions on London’s landmarks as well as some bike maintenance.  Hey Presto!  You can now take a group of maybe up to 20 out onto the streets of London.  No first aid.  No formal historic training – so read a book and make it up as you go along (which I think perhaps one or two of them were doing) and hope that none of your tourists ask any indepth questions or pull you up on your facts. 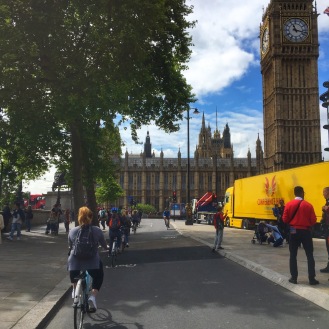 Cycling up to Big Ben 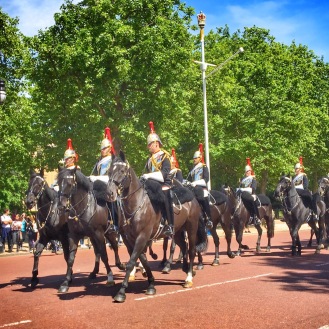 Changing of the Guards

I have organised to go out with the Italian bus tour guide.  I will share London cycling knowledge and I can pick her brains on  the historic sights as we go around the route. Maybe between us, we can impart knowledge to each other and be somewhat reasonably qualified.

In the meantime, I am due to meet with another cycle company and go on one of their tours…